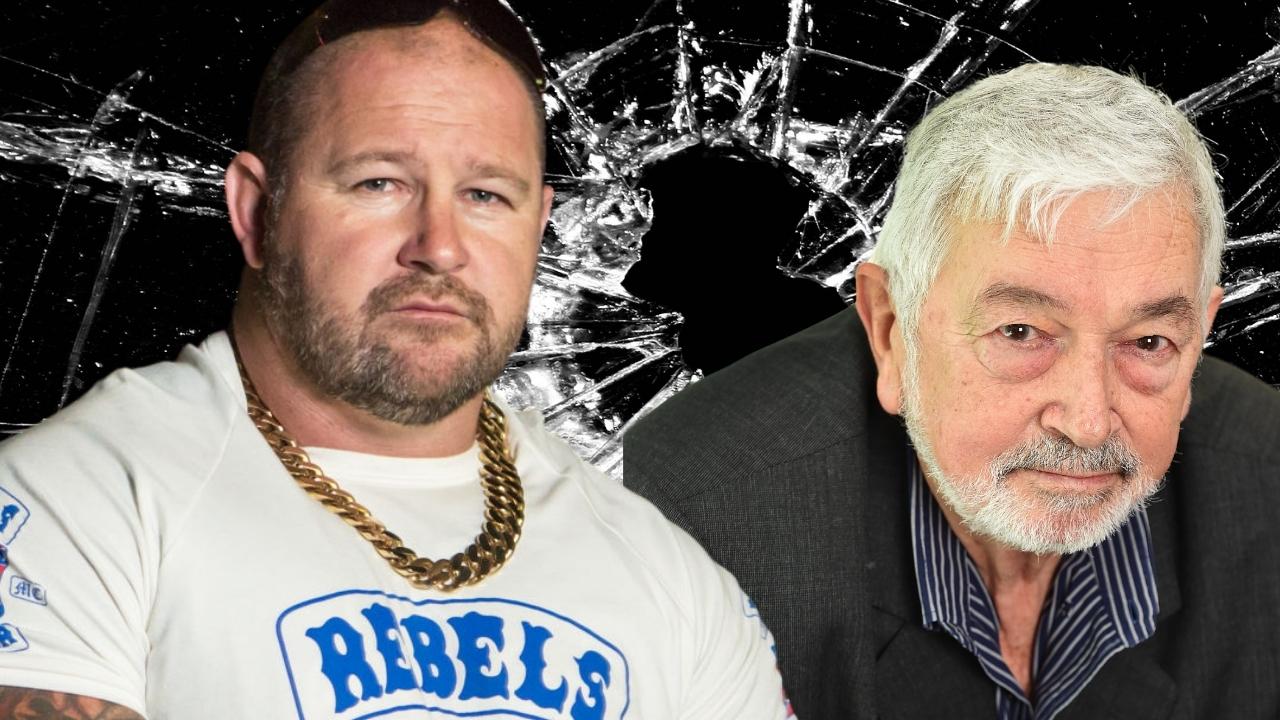 Weeks ago, Melbourne lawyer Colin Lovitt was pegged to defend the “sniper” who took out a top Rebels bikie. Now he’s dead — after a career getting infamous clients off the hook.

If or when police arrest the “sniper” who shot and killed heavyweight Rebels bikie Nick Martin at a Perth speedway last month, the accused is going to need a brilliant defence barrister … someone like Melbourne ace Colin Lovitt QC, for instance.

Lovitt’s record of acquittals in high-profile crime cases is famous from coast to coast, which is why so many West Australian bikies paid to fly the legal hit man across the Nullarbor.

But in the increasingly unlikely event that Martin’s alleged assassin is arrested, he won’t be getting the toughest “silk” in the business to bulldoze the prosecution case.

Apart from the fact that Lovitt hung up his horsehair wig several years ago, last weekend he blocked any chance of a cameo comeback by dying.

You can’t be more retired than that.

Anyone who thinks that’s an insensitive way to refer to his death didn’t know Colin Leslie Lovitt, whose salty turn of phrase, robust courtroom exchanges and willingness to throw a punch will be quoted long after his funeral.

Lovitt, known to his many friends as “the embarrister”, would be first to admit he was too offensive ever to be hypocritical about it.

When he was called on to speak at a lunch or dinner, as he often was, half his audience rocked with laughter and the other half blushed in shock at his unfiltered recollections of clients like Mark Brandon “Chopper” Read and witnesses such as Kenny Penfold’s “pigshead gang” in Moe.

Lovitt QC was good with a billiard cue or a glass of wine but no loss to the diplomatic corps.

This is the barrister who once called a magistrate a “cretin” in open court and who was feared and loathed by police he filleted in the witness box — unless, of course, they were charged with skullduggery and needed a streetfighter in their corner.

Among Lovitt’s best-known acquittals was that of Greg Domaszewicz over the death and disposal of the toddler Jaidyn Leskie at Moe in 1997.

As a blunt Lovitt told a reporter at the time, “not guilty” and “innocent” are very different things. He never guaranteed his clients were innocent, only that the prosecution hadn’t proven guilt beyond reasonable doubt.

In Perth, his biggest win was the acquittal of one of several outlaw bikies charged for the appalling crime that killed former detective Don Hancock and his unlucky mate, ex-bookmaker “Lou” Lewis, blown to bits by a car bomb set off by remote control in 2001.

The Hancock case is a reminder that few things are new in crime and punishment, despite assertions that the sniper attack on Nick Martin is a new level of criminal behaviour in Australia.

The shooting and the subsequent revenge killing of Hancock shows that both sniping and bombing have happened before. This is quite apart from other cases, such as one in 2008, when a hidden sniper shot at three Finks bikies riding on a highway after visiting associates at the Wooroloo prison farm near Perth.

The Wooroloo case was apparently never solved and, at least officially, neither was the sniper murder of transport contractor Kevin Hugh Pearce at a freight depot at Bendigo in 1985.

It didn’t take a highly-trained military marksman to kill Pearce, father of three — just a man with a grudge, a cheap .308 rifle and the patience to lie under a tree for a while.

The coroner named trucking contractor William James Matthews as the likely shooter or organiser of the shooting and the case remains high on the list of Victoria’s cold cases.

The Kevin Pearce shooting underlines the fact there are thousands professional kangaroo shooters and amateur goat, pig, fox and deer shooters plenty skilful enough to shoot a much easier target — a slow-moving man.

As for degrees of criminal sophistication, remote control bombing rates pretty highly. The Hancock murder is both technically elaborate and more frightening than a shooting because of the high likelihood of a bomb harming people other than the target.

Ironically, of course, it was Hancock’s decision to play sniper a year earlier that got him blown up.

It is 20 years since the one-time policeman shot a bikie dead — much the way former Rebels president Nick Martin was after being hit by a high-powered bullet as he stood with his family in the sparse crowd at the Kwinana speedway five weeks ago.

Hancock was a colourful “old-style” cop in a place and time when rogue Perth police sometimes fitted up people for crimes they didn’t commit, a tendency highlighted since then by legal and media probing of wrongfully convicted West Australian prisoners.

The man they called the “Silver Fox” was confident, tough and popular among people he wasn’t fitting up. In his 35 years in the force, the Kalgoorlie prospector’s son backed himself to get results. One way or another, he mostly got them.

But times changed, and Hancock didn’t.

His brilliant career was tarnished by persistent allegations he’d doctored evidence in the notorious Mickelberg mint gold swindle case, and hints he was too prosperous for an honest copper — though the fact he inherited goldmining leases and shares might have covered this.

He was denied promotion then pensioned off in 1994. After that, it seems, he found it hard to be no longer the feared head of detectives.

It was a fatal failing. Not just for Hancock himself, but for his mate “Lou” Lewis, the retired bookie killed with him when his car was blown up in suburban Lathlain in early September, 2001.

It was fatal, too, for Billy Grierson, the Gypsy Joker gang member gut-shot by Hancock almost a year before — thus triggering the revenge bombing, news of which was swamped by the twin towers terrorist attack in New York a week later.

The background was that Hancock had gone back to the goldfields of his youth, renovating the old stone pub, general store and ore-crushing battery at Ora Banda near Kalgoorlie. It was a tiny wild west town and Hancock was the sheriff.

Trouble started on the Sunday night the Sydney Olympics ended. A group of Gypsy Joker bikies camped nearby had worn out their welcome at the pub. Hancock told them to get out after one of them abused his daughter.

The bikies kept drinking at their camp. An hour later, a bullet buzzed past one of the men, although he didn’t hear a shot. Then a second shot hit Grierson in the ribs. He died quickly.

By the time detectives arrived next day, Hancock was in Perth to consult a top criminal barrister. He had, by then, lost a rifle and had developed a taste for fresh orange juice, which destroys gunshot residue otherwise easily detected by forensic tests.

Two weeks later, crude dynamite explosives wrecked the Ora Banda hotel. Then the Hancocks’ gold battery and general store attached to the hotel were blown up and their nearby house burned down.

Hancock was the police’s only suspect for Grierson’s death, and the Gypsy Jokers agreed.

But, instead of moving interstate, the pig-headed Hancock returned to the family house in Perth.

That’s where the bomb exploded as he and Lou Lewis pulled into the driveway after returning from Belmont racetrack, where the bomb had been fitted to the vehicle in the car park while the pair were at the races.

It took police a long time to make a case against the Gypsy Jokers — and then only because they managed to get a bikie, Sid “Snot” Reid, to break the code of silence and testify against the others.

Four were charged with the bombing murders and six with the Ora Banda bombings. But after Lovitt demolished Reid in the witness box, the jury decided “Snot” wasn’t a great witness. Possibly his nickname didn’t help.

They were all acquitted. It was another brilliant win for Lovitt.

An intriguing twist in the case was that the car bomb was far more sophisticated than the crude dynamiting of the Hancock properties in Ora Banda.

There is still a persistent rumour that the Gypsy Jokers brought in an expert bomb maker from an unaffiliated Sydney western suburbs bike gang. There is also the chance that someone else with a grievance against Hancock had used Grierson’s death as the perfect “smother” to launch their own long-range revenge against him.

The trouble with Hancock having so many potential enemies is that it makes “beyond reasonable doubt” a high bar to clear.

Now, another generation of Perth police are investigating the equally mysterious death of Nick Martin, the former Rebels president whose coffin was covered in pictures of $100 notes and buried under a Confederate flag.

One thing the police might have worked out is that even if the shot was from 300m, as opposed to a hole in the fence much closer than that, it’s an easy range for a regular shooter with a high-powered rifle.

As devoted Rebels would know, the first great sniper shot of history was at Fort Sumter in South Carolina in the Civil War in 1861, when a Confederate marksman killed a Union soldier at a range of 1390 yards.

That is 1270m, more than four times the distance covered by the bullet that killed Nick Martin 160 years later.