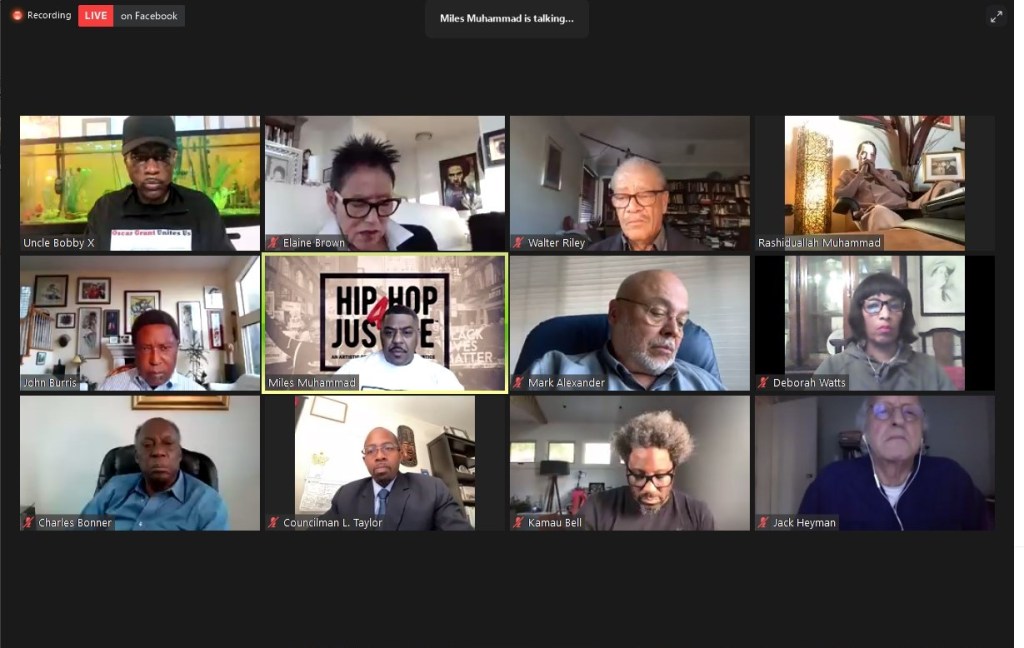 Civic and civil-rights leaders are amassing national support to pressure Alameda County prosecutors to charge an ex-BART police officer they blame for the melee that ended with another officer fatally shooting Oscar Grant 12 years ago.

A Zoom webinar Saturday, organized by Grant’s family and which included a former Black Panther leader and the family of Emmett Till, centered on the Justice for Oscar Grant Coalition renewing their push for murder charges against Anthony Pirone. District Attorney Nancy O’Malley announced Jan. 11 that she would not prosecute Pirone after a new evaluation of the case at the behest of Grant’s family and supporters.

That has not deterred their attorneys and advocates, who wholly rejected the analysis behind the non-charging decision, and said they are meeting with O’Malley on Tuesday to convince her to reconsider. A major disagreement revolves around the severity of force that Pirone used on Grant, which O’Malley’s office concluded did not warrant any chargeable felonies, but which Grant’s family said caused serious brain and head injuries.

“We’re here to bring light to that and put the pressure on Nancy O’Malley,” Cephus X Johnson, Grant’s uncle, said Saturday. “To pressure her to do the right thing.”

Elaine Brown, former chair of the Black Panther Party, and Sybrina Fulton, Trayvon Martin’s mother, were among those lending their support, as was Deborah Watts, co-founder of the Emmett Till Legacy Foundation. Watts is the cousin of Till, whose horrific 1955 beating death by two White men crystallized the savagery of racial bigotry and injustice in the United States and heightened the Civil Rights Movement.

They were among several speakers saying their efforts are meant to assist not only with the Grant case, but to provide a blueprint that can be followed across the country for other families of victims of police violence.

“We’re with you, and the fight that you have is our fight,” Watts said.

Part of what spurred the DA’s office to re-evaluate Pirone’s culpability was the family’s comparison of Pirone’s actions, which included him putting his knee and body weight on Grant’s neck to restrain him, to the actions of Minneapolis police officer Derek Chauvin in the killing of George Floyd last Memorial Day.

The attorneys representing Grant’s family also renewed attention to an internal report on Grant’s death — produced after then-BART Officer Johannes Mehserle fatally shot him and claimed that he mixed up his gun and Taser — that only surfaced in 2019 because of new police-transparency laws. That report, known as the Meyers Nave report in reference to the law firm that wrote it, determined that “the actions of Officer Pirone started a cascade of events that ultimately led to the shooting of Grant.”

“The DA’s office made light of Pirone’s role … and did not give due consideration to the viciousness of his role,” said attorney John Burris, adding that one of his team’s goals for Tuesday is to “give her more of analysis of why it was more significant than what her office claimed that it was.”

In a video in which O’Malley announced her decision not to charge Pirone, she said “although Pirone’s conduct was aggressive, utterly unprofessional and disgraceful, it did not rise to the mental state required for murder.” She also stated that other charges for which Pirone might have been eligible, such as misdemeanor assault under the color of authority, were out of reach because the statute of limitations had expired.

Walter Riley, also an attorney for the family, was incredulous at that conclusion, asserting that Pirone smashed Grant’s head into a wall and kicked him with a running windup. The Meyers Nave report also found that Pirone yelled a Black racial slur at Grant and his friends beforehand.

“That is not a misdemeanor in any world,” Riley said.

The attorneys also said they have hired forensic pathologist Bennett Omalu, a former San Joaquin County medical examiner famed for his earlier research on the brain-deteriorating effects of repeated blows to the head endured by football players, to analyze evidence.

Mehserle, who was among several officers called to the Fruitvale Station BART platform barely after midnight on Jan. 1, 2009 for a report of a fight on the train, was charged with murder but was convicted by a Los Angeles County jury of involuntary manslaughter. He served 11 months in prison and was released in June 2011. Pirone was called to testify in the trial but was declared a hostile witness, leading Grant’s supporters to believe that created the opportunity for prosecutors to charge him.

Charles Bonner, another attorney for Grant’s family, contends that Pirone can be charged with felony murder on the premise that he aided and abetted Grant’s death by inflicting physical violence and by not stopping Mehserle despite being close enough to see that his colleague had drawn a firearm and not a Taser, weapons that are distinct in color, weight and design.

Many of Saturday’s panelists emphasized how public support and outcry are vital to securing a different outcome, noting that protests after Grant’s death helped influence criminal charges against Mehserle. The Oakland City Council and BART board of directors last week each passed resolutions urging the prosecution of Pirone, and a national online petition has been circulated to further galvanize support.

“When we go see Nancy on Tuesday, we are hoping we that have the backing of thousands more people,” Riley said. “We are a movement, is what is going to change things.”