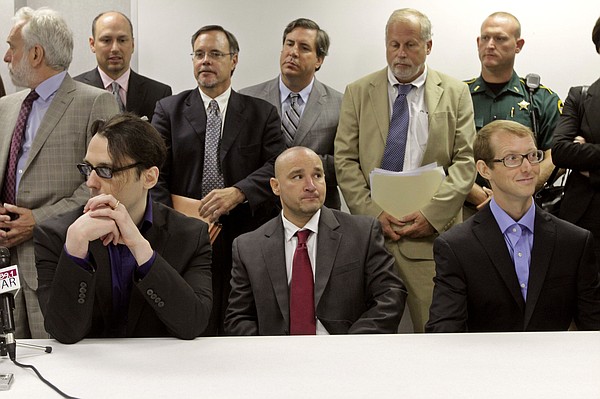 Evidence requested by attorneys for new DNA testing in one of the most high-profile, savage murder cases in Arkansas history has been lost or destroyed by fire, dashing hopes that the men convicted of the killings of three children in West Memphis in 1993 will be exonerated.

Known as the West Memphis Three, Damien Echols, Jason Baldwin and Jessie Misskelley were found guilty in 1994 of the gruesome slayings of three 8-year-old boys whose bodies were found May 6, 1993, in a drainage ditch near West Memphis.

The victims — Christopher Byers, Stevie Branch and Michael Moore — were found naked and hogtied with shoelaces. Investigators thought the murders were connected to a Satanic ritual.

Though no DNA evidence ever tied the West Memphis Three to the crime scene, Echols, Baldwin and Misskelley were convicted, spending nearly 20 years in prison until a twist of events in August 2011 when prosecutors allowed the men to immediately walk free.

A bargain, known as an Alford Plea, permitted the men to maintain their innocence yet plead guilty in exchange for an 18-year sentence and credit for time served. It was reached after the results of additional DNA testing still failed to connect the three to the crime.

Since their release, attorneys and supporters of the West Memphis Three — who have been the subject of numerous articles, movies and books — have been working to clear their names.

“We remain hopeful that we will unravel this case and discover who committed these crimes,” Echols’ spouse, Lorri Davis, said via phone Friday from New York City where the couple lives. “We still believe we are going to do that, and we are never going to back down.”

“We intend to keep this alive,” said Lonnie Soury, a New York-based spokesman who works with Arkansas Take Action, a group advocating for the exoneration of the three men. “We will go back to court if we have to. We are going to get to the bottom of this one way or another.”

Most recently, attorneys for Echols requested access to evidence from the crime scene to conduct DNA testing using new technology that they hoped might shed light on who actually committed the heinous killings.

Attorneys learned that the evidence they hoped to test — including the victims’ shoes, socks, shirts and shoelaces that were used as ligatures — had either been lost, misplaced or destroyed by fire, according to a Freedom of Information Act request submitted July 6, 2021, by one of Echols’ attorneys, Patrick Benca, to the West Memphis Police Department.

Benca said he learned of the missing evidence from Keith Chrestman, prosecuting attorney for the 2nd Judicial District, which includes Crittenden County where West Memphis is located.

As of Friday afternoon, Benca said Echols’ legal team had not received a response from the West Memphis Police Department to their FOIA request.

Before submission of the FOIA request, the West Memphis Police Department had not confirmed with attorneys that the evidence they are seeking is gone, Benca said.

The West Memphis Police Department did not return calls made over two days by the Arkansas Democrat Gazette seeking comment.

During an April 2021 interview with the news website Talk Business & Politics, Chrestman said much of the evidence from the West Memphis Three case was gone.

“Echols, the alleged ringleader, has asked Chrestman’s office to test remaining items of evidence in the case, but most of it is gone, the prosecutor said,” Talk Business & Politics reported. “In capital murder cases, evidence is kept and securely stored, but in cases like this the evidence is often destroyed or lost.”

Chrestman did not return requests for comment from the Arkansas Democrat Gazette.

West Memphis Mayor Marco McClendon said via phone Friday that he had confirmed with the West Memphis Police Department that some of the evidence “might have been destroyed” in a fire “around 15 years ago.”

“I don’t know what was destroyed or what was not destroyed,” McClendon said. “That is what I am being told, that there was a fire many, many years ago.”

The Arkansas state Crime Lab, which conducts forensic testing for law enforcement agencies across the state, transferred the evidence back to the West Memphis Police Department, said Kermit Channell, the lab’s executive director.

“That policy was true then just like it is today,” Channell said. “We don’t have the physical storage space to keep all the homicide evidence for the state of Arkansas. It belongs to that investigative agency.”

Logs detailing the chain of custody and other specifics of when evidence from the West Memphis Three case was transferred from the state Crime Lab to West Memphis are confidential and only available to prosecutors, defense attorneys and public defenders, Channell said.

“Anytime you look at any old case it becomes difficult,” Channell said. “In my experience, it is always difficult when you go back and look at a case that is 25 or 30 years old.”

As part of the Alford Plea agreement, prosecutors agreed that “the Arkansas State Crime Laboratory would help seek other suspects on any DNA evidence produced in private laboratory tests during the defense team’s investigation,” the FOIA request to the West Memphis Police Department said.

“The state should be held accountable,” Benca said, adding that prosecutors and police should adhere to their side of the agreement to “make sure we could get access to it [evidence] for further testing.”

“New technology and advances in science would now allow us to test DNA in amounts so small that it would have been previously impossible,” Echols said via Twitter Wednesday. “The state of Arkansas continues to attempt to prevent this testing from happening.”

Blake Hendrix, an attorney for Jason Baldwin, said evidence gathered by the West Memphis police has long been in “disarray.”

“When we — post conviction counsel — came on board, our first effort was to gather all physical and forensic evidence, and, with the prosecution’s agreement, to submit it to independent laboratories for testing,” Hendrix said via email.

“We soon found out that the evidence the West Memphis Police Department gathered was in complete disarray — improperly gathered, improperly stored — and worse, crucial evidence that would have [proved] our clients’ innocence was missing or ignored,” said Hendrix, who is with the Little Rock-based Fuqua Campbell P.A. law firm.

“These three men spent too many years of their lives locked up for something they didn’t do,” Hendrix said.

Benca, Echols’ attorney, said time is of the essence.

Ten years after the Alford Plea, the court where the case was tried will lose jurisdiction, which means this August, Echols’ defense attorneys could no longer file petitions for relief, which, depending on what happened to the evidence, could be a petition for dismissal.

“What we are asking for, we don’t know,” Benca said. “It is speculative at this point. It would be quite aggressive. This is pretty serious.”

Part of the Alford Plea agreement was that defense attorneys “wouldn’t sue the state civilly for wrongful conviction,” Benca said. “That would again be at issue if the state failed to fulfill their obligations, which included the preservation of evidence for future testing.”