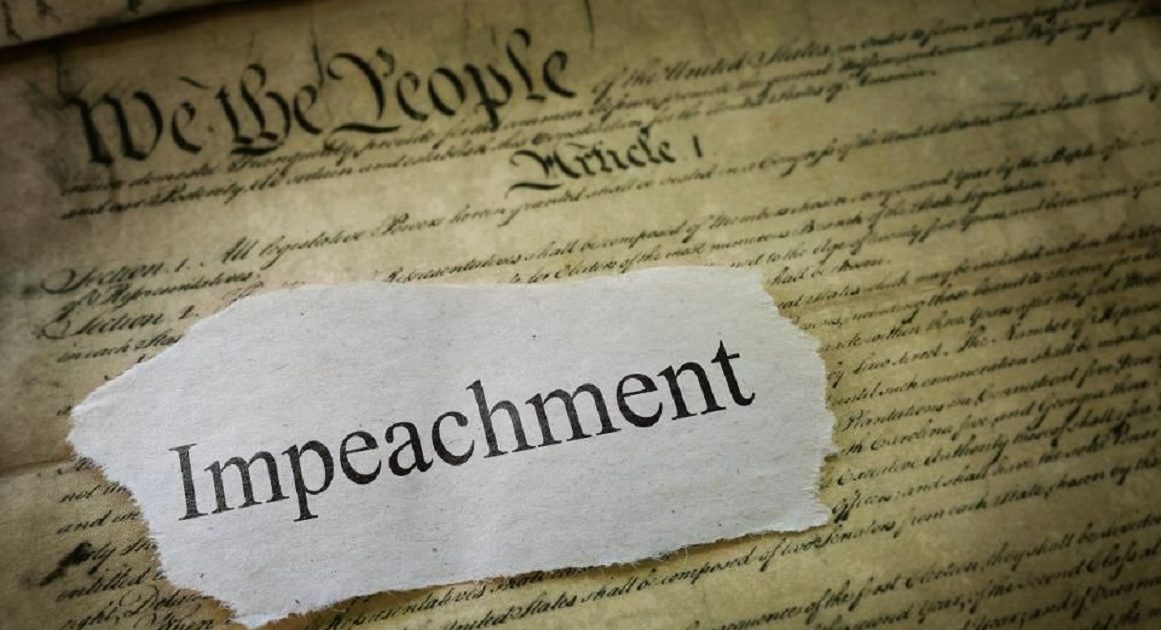 Prominent conservative legal scholar Michael Stokes Paulsen, a leading academic expert on impeachment, rarely agrees on much of anything with famous liberal Harvard law Professor Laurence Tribe. Impeachment is just one of many constitutional issues on which they have major differences. In 2018, Paulsen published a Harvard Law Review essay forcefully criticizing Tribe’s book on impeachment, coauthored with Joshua Matz (Tribe and Matz responded here). But Paulsen, Tribe, and Matz are on the same page when it comes to advocating a swift second impeachment process for Donald Trump.

Here’s Paulsen, in an article published yesterday in The Bulwark:

President Trump should be impeached and removed from office immediately.

He has, without doubt, committed acts constituting “high Crimes and Misdemeanors” within the meaning of the Constitution’s impeachment standard. He has attempted to preserve himself in office, notwithstanding his defeat for reelection, by seeking to subvert the results of a series of popular democratic state elections—a terrible attack on our constitutional republican government…. Over the course of an hour-long phone call last Saturday, he essentially threatened state election officials in Georgia, seeking to intimidate them into “finding”—manufacturing—sufficient votes for him to corruptly overturn the official, verified count of a freely and fairly conducted election….

Trump incited a mob to march on the Capitol and disrupt Congress’s official counting of electors’ votes for his opponent. His remarks and tweets fairly can be read as efforts to incite imminent lawlessness, insurrection and violence—including even attacks directed against his own vice president….

If Trump’s misconduct is not impeachable, nothing is. If this is not the legal and moral occasion for exercise of the power to impeach, convict, remove from office, and disqualify from future office a president, then there is never such an occasion….

Constitutionally, Trump can be impeached, tried, convicted, and removed in a day or even a matter of a few hours—literally overnight….

The point is also to disqualify such a would-be usurper from ever seeking to become president again. The Constitution specifies that “Judgment in Cases of Impeachment shall not extend further than to removal from Office, and disqualification to hold and enjoy any Office of honor, Trust, or Profit under the United States…” A failure to impeach and convict President Trump means that he could run again in 2024, raising the specter of a coup-plotting former president waiting in the wings and attempting to foment further insurrections.

Tribe and Matz make similar points  in an op ed published on the same day in the Washington Post:

As the House of Representatives takes the extraordinary step of considering a second impeachment of President Trump during his final days in office, two questions loom large: Did Trump commit impeachable offenses? And does it make sense to impeach even though the Senate may not try and convict him before he leaves office on Jan. 20? The answer to both questions is yes.

Trump spent months convincing his followers, without factual basis, that they were victims of a massive electoral fraud. He summoned them to D.C. for a “wild” protest as Congress met to certify the election results. He then whipped them into a frenzy and aimed the angry horde straight at the Capitol. When Trump’s mob breached the building, he inexcusably dawdled in deploying force to quell the riot. And when he finally released a video statement, it only made matters worse….

The article of impeachment circulated Friday by Democratic Reps. David N. Cicilline (R.I.), Jamie B. Raskin (Md.) and Ted Lieu (Calif.) accurately captures the gravity of Trump’s misconduct. It situates his action within his “prior efforts to subvert and obstruct the certification of the results of the 2020 presidential election.” And it recognizes the terrible damage that Trump, through his incitement, inflicted on the nation as a whole…

But the Constitution does not require slow motion at times of crisis, especially when the nation witnessed an impeachable offense in real time. Here, holding protracted hearings would be a foolish undertaking, akin to playing a sonata on the decks of the Titanic. The House can and should act with dispatch.

I would add that concerns about the due process are mitigated by the fact that impeachment and removal does not require anything like the same degree of due process as is necessary for a criminal or even civil trial, which threatens to deprive the defendant of fundamental human rights to life, liberty or property. I expanded on this point in a piece written at the time of Trump’s first impeachment:

In criminal cases, there is good reason to avoid conviction unless the charge against the accused is an offense clearly delineated by law, and guilt has been proven beyond a reasonable doubt. The reason why is that the defendant stands to lose her liberty or property—or even her life. By contrast, the risk facing an impeached president is removal from a position of enormous power [and being barred from holding such a position in the future].

Unlike unjust deprivation of life, liberty, or property, removal from power doesn’t violate anyone’s human rights. When real human rights are at stake, it may make sense to allow ten guilty people to go free, in order to save even one innocent from conviction. When it comes to positions of power, almost the opposite is true: Removing ten “normal” politicians is more than justified if that is the only way to get rid of one who engages in grave abuses of power.

In a case where the facts are clear and indisputable, like this one, it need not take more than a day or two for the House to debate and vote on impeachment, and for the Senate to conduct a trial in which both sides have sufficient time (perhaps several hours each) to present arguments and evidence.  That may not be enough to send a man to prison. But it should be enough to remove him from a position of power.

Finally, it is important to move decisively against Trump in order to deter future presidents from comparable misconduct. Too many times over the last century, we have allowed presidents to get away with grave violations of the Constitution and horrific abuses of power, without suffering any significant repercussions. I gave some examples here:

All too many past presidents have gotten away with horrific illegality and abuses of power, such as FDR’s internment of Japanese-Americans in concentration camps, Woodrow Wilson’s massive violations of civil liberties, and—most recently—Obama’s starting two wars without congressional authorization, and Trump’s cruel family separation and travel ban policies…

This history—including his own previous impunity—may well have emboldened Trump into thinking that he could get away with doing whatever he wanted. And if we let the impunity continue, it could easily embolden future presidents, some of whom may be less inept than Trump was in their efforts to subvert liberal democracy.

For all these reasons, I too favor a swift impeachment process, though subject to the prudential caveats I noted here.