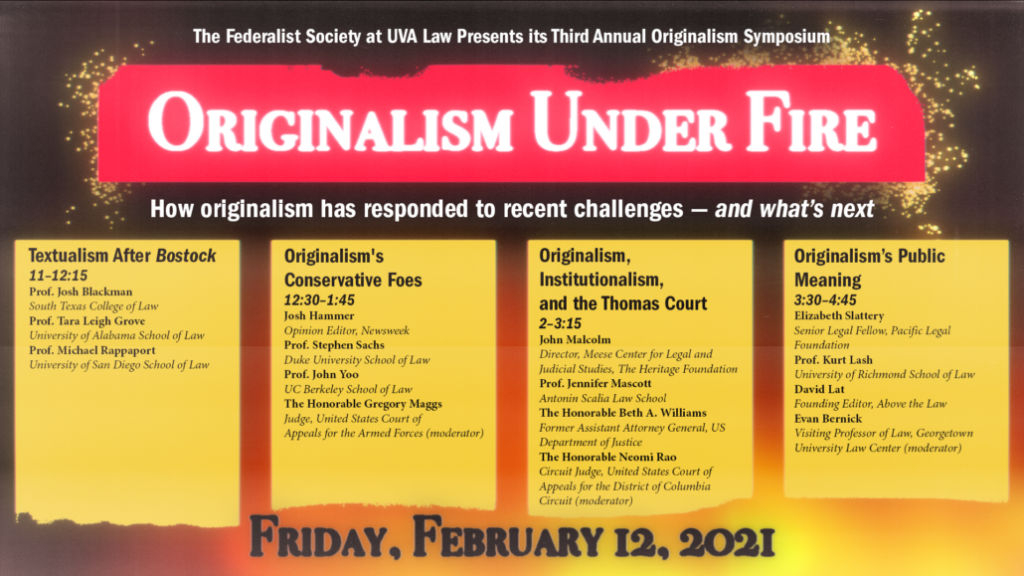 On Friday, the University of Virginia Federalist Society Chapter will hold its 2021 Originalist Symposium. I spoke at this conference last year–it was one of my final trips out of town before the lockdown. This year, the students have upped the ante, and put together a stellar lineup. You can register today to attend virtually.

I will be speaking on the first panel about Bostock.

Bostock v. Clayton County was a landmark decision in more ways than one. Of course, the holding was groundbreaking. But so too was the fact that all three Bostock opinions rooted themselves in textualist principles. How much does the Bostock split matter? Should we expect more or fewer divisions like those in Bostock? And how will the Court’s changes in personnel affect this divide?

The second panel will track the growing discontent for originalism within the conservative legal movement.

The conservative legal movement has championed originalism for decades. But there are growing signs of dissension — some argue that originalism has outlived its utility and should be abandoned. How should originalists respond to these challenges from the right?

The third panel looks at the (gasp) Thomas Court:

Originalism, Institutionalism, and the Thomas Court

With the Court’s conservative wing ascendent, what should originalists expect in the coming years? Will one or more justices try to position themselves as the intellectual heir to Justice Scalia, or will different justices establish their own brands of originalism? What comes next in the judicial wars, and how will President Biden shape the judiciary?

The closing panel looks at public perceptions of originalism:

Supreme Court confirmation hearings tend to shine a bright spotlight on originalism. During Justice Barrett’s hearings, many prominent figures — from politicians to Hollywood celebrities — opined on the nature and merits of originalism. But how does the general public view originalism? And how much should originalists be concerned with the public’s conception of what originalism is?